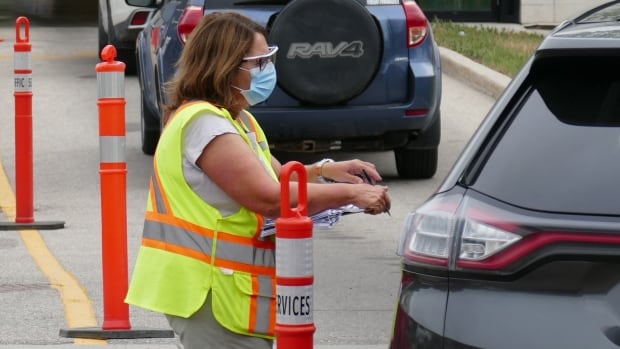 There are 32 more cases of COVID-19 in Manitoba on Friday, health officials say in a news release, with 18 of them in southwestern Manitoba’s Prairie Mountain Health region.

Initial investigations suggest 14 of the new cases are close contacts of previously announced cases in the province, the release says. Investigations continue, and information about the new cases will be updated once it’s available.

There are now five people in hospital with the illness, one of whom is in intensive care, the release says.

Manitoba’s five-day test positivity rate, a rolling average of COVID-19 tests that come back positive, is now 2.3 per cent, a drop from three per cent on Thursday.

The new cases bring Manitoba’s active caseload to 418, the highest since the beginning of the pandemic, according to data on that portal.

More than half of those cases — 223 — are in the Prairie Mountain Health region, data on that portal says.

People in that region had to start following new rules as of Monday — masks are now mandatory in public and gatherings must be limited to 10 — after being moved to the restricted level under the province’s pandemic response system.

To date, 1,096 cases of COVID-19 have been identified in Manitoba, and 664 people have recovered from the illness, the news release says.

Roussin also announced Thursday that a woman in her 90s who had COVID-19 had died.

It was the province’s 14th fatality linked to the illness caused by the new coronavirus, and the second stemming from an outbreak at the Bethesda Place care home in Steinbach, Man.

Also on Thursday, an outbreak of the illness was declared at a second care home, in Brandon, Man. As of Thursday, a worker at Rideau Park Personal Care Home was the only person there to test positive for COVID-19.

No new cases at either care home were announced on Friday.

There were 1,252 more COVID-19 tests done in Manitoba on Thursday, bringing the total completed in the province since early February to 132,085.

Because of upgrades being made to the province’s data system this weekend, the number of people in hospital and intensive care with COVID-19 in Manitoba won’t be updated again until Sunday, the release says.