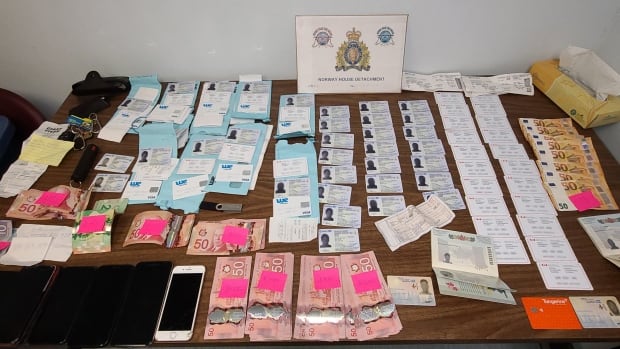 Three Quebec men who tried to get through a COVID-19 checkstop at a northern Manitoba First Nation are now facing charges related to identity fraud, RCMP say.

RCMP in Norway House, about 460 kilometres north of Winnipeg, responded to a call about a suspicious vehicle trying to get into the community just after 8:30 p.m. last Thursday, according to a Wednesday news release.

The men inside the vehicle didn’t seem to know where they were going and refused to answer multiple questions at the checkstop, officers were told.

Police later stopped the vehicle and say they found more than 70 counterfeit IDs, cash, cellphones and pepper spray inside.

The men, who are between 19 and 23 years old, are from Chateauguay and Mercier, Que., just outside of Montreal. All three have been charged with identity theft, identity fraud, possession of property obtained by crime and possession of a weapon for a dangerous purpose.

They appeared before a judge and will be back in court on Oct. 7.