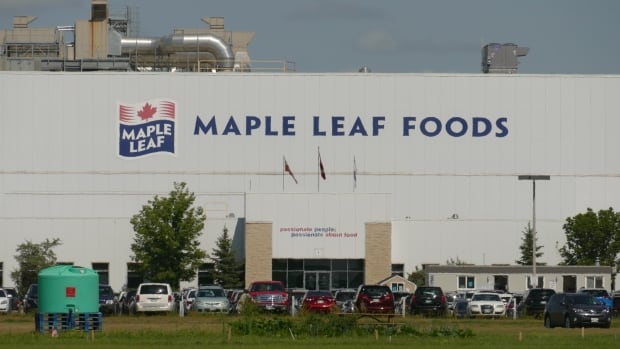 The three additional cases are among non-production unionized employees at the pork processing facility, United Food and Commercial Workers Local 832 said in a memo to workers early Thursday morning.

“We want them to shut the plant down,” Jeff Traeger, president of UFCW Local 832, told CBC News on Thursday morning.

The union was alerted about the cases around 10 p.m. on Wednesday, Traeger said.

The UFCW is asking Maple Leaf to stop production at the plant until Aug. 10 at the earliest, until more information is known about any outstanding tests among workers.

The new cases come after one other worker in the plant tested positive for COVID-19, which prompted more than 70 employees who may have been exposed to go into self-isolation.

The first worker who tested positive, who also wasn’t on the production line, hasn’t been at work since July 28, the union said Wednesday.

The employee passed the medical screening before starting work that day but started feeling sick during the day, the union said.

UFCW and Maple Leaf were informed about the initial positive test on Friday, a union spokesperson said Wednesday. Parts of the plant were deep-cleaned over the long weekend, Bea Bruske, secretary-treasurer of UFCW Local 832, said Wednesday.

Maple Leaf Foods said in a statement Wednesday that it was reviewing the circumstances around the first worker, who was recovering at home.

It appears the worker contracted COVID-19 while out in the community, the company said Wednesday.

Traeger said 60 tests are still outstanding and the union has been in contact with Maple Leaf about shutting the plant down, but so far that request has not been granted.

“We’re looking for Maple Leaf to shut the plant down until all of those test results come back, have a proper deep cleaning of the plant done, make sure people have time to self-isolate and then start up production again after that’s confirmed and that they can say with confidence that they have it under control,” Traeger said.

CBC News asked Maple Leaf for an interview, but the company instead sent an emailed statement.

The company has notified the Canadian Food Inspection Agency, the union and its employees of the positive tests, the email says.

The company believes the most recent cases were contracted in the community and not at work.

It does not plan to shut down the plant.

“We will continue to operate our Brandon plant as long as we believe we can provide an environment that will protect the safety of our people while working,” the statement says.

“Given our daily health screening, temperature monitoring, social distancing and the personal protective equipment all team members wear while at work, we feel confident that our plant environment is safe.”

The UFCW represents nearly 2,000 workers at the Brandon plant. One other employee, a security guard at the plant, tested positive for COVID-19 in May.

Health Minister Cameron Friesen said Thursday morning he won’t comment on the Maple Leaf cases. However, he said Maple Leaf and many other businesses have been working hard to implement COVID-19 precautions.

“We have employers and workplaces across this province who have put enormous effort into getting this right, into keeping their employees and keeping the public safe,” Friesen said.

Traeger said his biggest concern is a repeat of what has happened at other meat processing plants in Canada. Several plants were hit hard by COVID-19 outbreaks this spring.

The JBS plant in Brooks, Alta., Harmony Beef in Balzac, Alta., and Cargill in High River, Alta., all saw positive cases. More than 1,500 cases of COVID-19 were linked to the Cargill plant, Alberta health officials said, with more than 940 employees testing positive.

“The nature of the type of work these people do is shoulder to shoulder,” Traeger said.

“Once the virus gets into a plant like this, it quite easily spreads, and that’s what we’re worried about.”

The union has also written to Friesen, asking the province to intervene and order the plant shuttered for the time being, he said.

“We think that’s the prudent thing to do,” Traeger said. “There’s no question.”