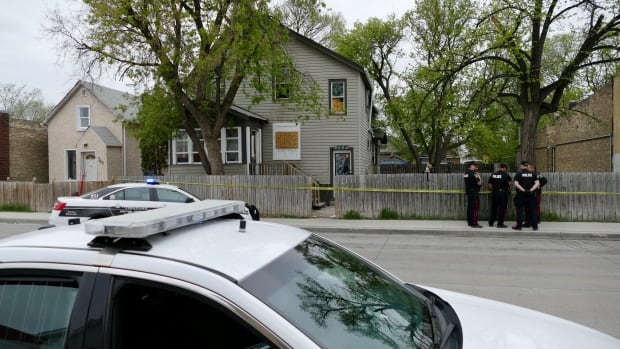 A 23-year-old man died after being found with gunshot wounds on the front steps of a house in Winnipeg’s William Whyte neighbourhood on Thursday morning, police say.

Winnipeg police responded to a report that a man was shot at a house on Selkirk Avenue between Arlington and Parr streets around 9:30 a.m. Thursday, the Winnipeg Police Service said in a news release on Friday.

The man was taken in critical condition to hospital, where he was pronounced dead.

Police would not say Friday whether there are any suspects yet or how many times the man had been shot.

“However, it does not look like it was random,” spokesperson Const. Rob Carver said at a news conference on Friday morning.

The victim has had contact with police in the past, Carver said.

The 911 call came from someone in the area who heard gunshots and almost immediately found the injured man, Carver said.

Most gun crime in Winnipeg is related to firearms that people have gotten illegally, Carver said.

“I cannot remember the last time we had a situation where we arrested somebody with a firearm or a firearm-related offence, and that gun was legally in their possession,” he said.

It’s Winnipeg’s 16th homicide of 2020. At this time last year, the city was at the same number of homicides, Carver said.