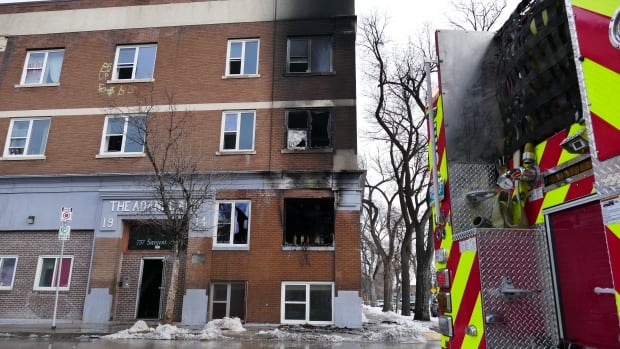 Winnipeg first responders say two people are in hospital, one in critical condition and one in stable condition, following an early morning apartment fire in the city’s West End on Monday.

Firefighters found thick smoke and flames coming from a third-floor window when they were called to the Adanac apartment building at the corner of Sargent Avenue and Beverley Street at 5:50 a.m., a news release from the city says.

They called for more assistance to fight the fire while several people were rescued from the building.

One person was taken down a ladder from the third storey.

Firefighters were forced from the building at one point because of deteriorating conditions.

Two people were taken to hospital, while paramedics assessed seven other people.

Several cats also were rescued from the building, and one needed oxygen before it was returned to its owners. Winnipeg Animal Services later came to provide care for the other animals.

Winnipeg Transit buses provided shelter for people who were displaced. The city’s emergency social services team will give them resources.