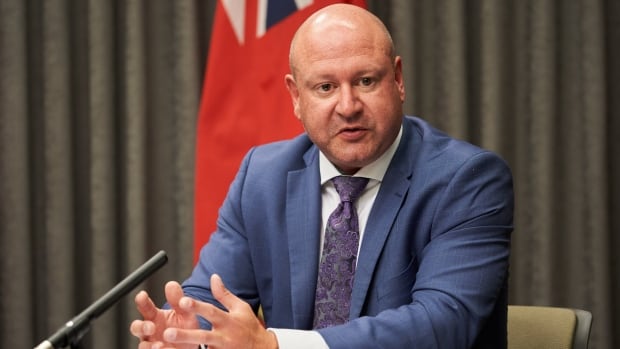 Two more people with COVID-19 have died in Manitoba, the province announced on Thursday.

The two women who died are linked to the Bethesda Place personal care home in Steinbach, the site of a known COVID-19 outbreak, Chief Provincial Public Health Officer Dr. Brent Roussin said at a news conference.

The outbreak at the Southern Health region care home is now at 13 cases: seven workers and six residents, four of whom have died.

Roussin said the outbreak at Bethesda Place was initially contained to one wing, but now appears to have spread to another.

“This comes as a real reminder that we have to stay on guard,” he said.

There are 20 new confirmed cases of the illness on Thursday, and the total number of active cases in the province is 457.

Thirteen of the new cases are in the Winnipeg health region. Initial investigations into those cases suggest nearly half are close contacts of known cases, Roussin said.

Another six are in the Prairie Mountain Health region and one is in the Interlake Health region. More information will only be released about the new cases if there’s a risk to public health, he said.

The province announced another possible public exposure to COVID-19 in Brandon, at ABC Taxi Cabs and Limousine Service at 144 12th St. from Aug. 19 to 21.

The province’s five-day test positivity rate — a rolling average of the COVID-19 tests that come back positive — is now 1.3 per cent.

On Wednesday, 1,339 more COVID-19 tests were done in Manitoba, bringing the total completed in the province since early February to 140,982.

To date, there have been 1,264 cases of the illness detected in the province, and 791 people have recovered.

There are now 12 people in hospital with COVID-19 in Manitoba, including one in intensive care.

On Tuesday and Wednesday, there were 14 people with COVID-19 in hospital in Manitoba — the most people hospitalized with the illness at once in the province.

The province also announced two more COVID-19 outbreaks at personal care homes in Manitoba on Wednesday, both in Winnipeg.

They joined a growing list of care homes and health-care sites in the province that have initiated outbreak protocols after detecting a case of the illness, including Bethesda Place and several in Brandon, Man.

The province also reiterated it is bringing back travel restrictions to northern Manitoba and remote communities starting Friday, though people are still allowed to travel directly to a campground or lodge in the north. Travellers will need to limit any stops to just the necessities, and are asked to respect any additional restrictions put in place by First Nations.

More details about the orders limiting travel in the north will be posted shortly, the province said.