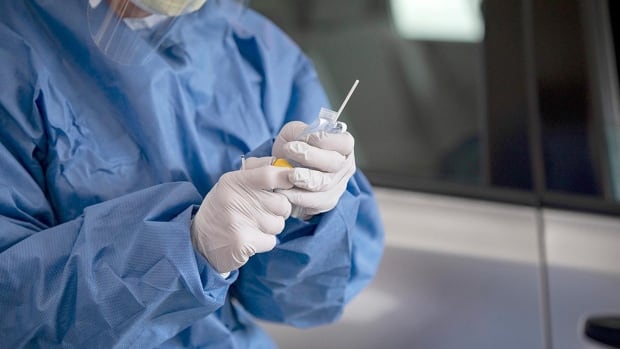 There are 16 new cases of COVID-19 in Manitoba on Wednesday, according to a provincial press release.

That brings the total number of active cases in the province to 404, while 945 people have recovered.

Public health offiicals say several of the Winnipeg cases are close contacts of known cases and are not linked to any current outbreaks.

The current five-day COVID-19 test positivity rate — a rolling average of the tests that come back positive — is 1.3 per cent.

“The worker immediately began self-isolating and is recovering at home. It has been confirmed that the worker did not work any shifts during the infectious period,” said a spokesperson for the health region.

Visits are suspended at the personal care home, although the risk to residents and staff are “extremely low,” the spokesperson said.

Officials are also warning of a possible exposure to COVID-19 that may have occurred at a Winnipeg Tim Hortons earlier this month.

The exposure took place at the location on the corner of Portage Avenue at Westwood Drive between Sept. 2 and 5, according to the release. No times were given.

The risk of anyone contracting the virus is low, but officials are asking anyone who attended the spot to be aware and get tested if they develop symptoms.

One of Brandon’s two COVID-19 testing sites — the location at Keystone Centre — will close permanently this weekend. Those who need to be tested are asked to go to the Brandon Town Centre site after Saturday.

On Tuesday, 653 tests were completed, bringing the total number of lab tests completed since early February to 149,188.

Dr. Brent Roussin, the province’s chief public health officer, announced 11 new cases on Tuesday, as well as a growing numbers of cases stemming from outbreaks at personal care homes and health-care centres in the province.

It also came to light that a COVID-19 outbreak in March at Winnipeg’s Health Sciences Centre led to the deaths of two patients.

The deaths were revealed in an epidemiology report that was completed in July but made public last week — nearly five months after the outbreak.

On Wednesday, Canada had 133,897 confirmed and presumptive coronavirus cases. Provinces and territories listed 117,701 of those as recovered or resolved.