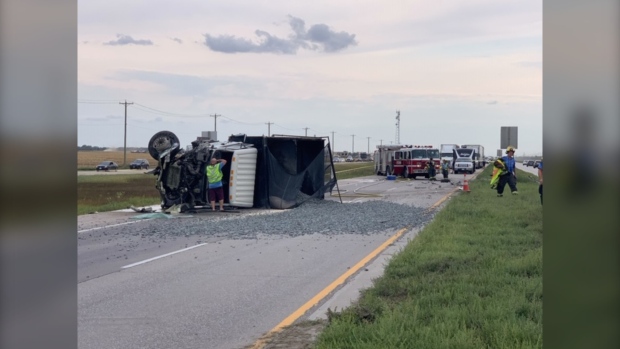 WINNIPEG — A 15-month old was listed in critical condition Saturday, a day after a major crash on the Perimeter Highway sent a family to hospital.

The collision happened during the evening rush hour Friday west of the St. Anne’s Road intersection. It involved as many as five vehicles.

RCMP said the collision seriously injured a man, woman and their 15-month-old child. STARS Air Ambulance said the baby was airlifted to the Health Sciences Centre.

The child’s parents are now in stable condition.

Police said the chain of events began when a gravel truck hit an SUV near the intersection. Both were travelling in the eastbound lane.

“The SUV, after being struck, spun around and entered the ditch where it rolled,” according to the RCMP.

Police said the gravel truck tried to avoid the collision, driving into the passing lane and hitting another SUV.

The gravel truck collided with the SUV, struck the median, then flipped over on its side spilling its load.

No other injuries were reported.

The crash is under investigation.