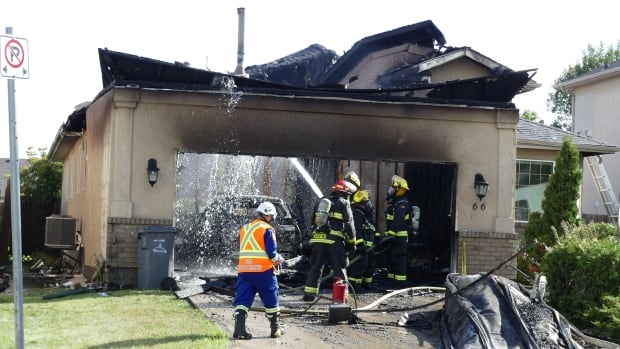 A woman was taken to hospital after a fire broke out in a garage in Winnipeg’s Linden Woods neighbourhood on Saturday afternoon.

Emergency crews were called to the home on Marksbridge Drive, off of Lindenwoods Drive West, around 3:30 p.m., says District Chief Dick Vlaming of the Winnipeg Fire Paramedic Service.

The garage was on fire, and the flames spread to the house and was at risk of spreading to the neighbouring house, he said.

“We protected that, and once the fire went down we started an offensive attack, which was inside,” Vlaming said.

A woman was taken to hospital, and Vlaming says her condition isn’t known at this time.

“It was pretty scared but we saved it,” he said.

Vlaming says the cause of the fire is under investigation and he couldn’t provide a damage estimate at this time.