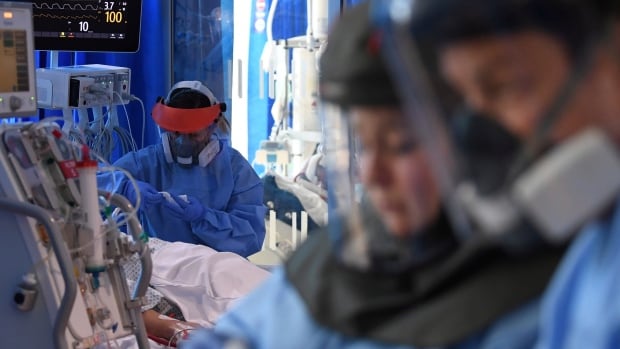 One new case of COVID-19 in Manitoba has been identified, connected with an outbreak at the Brandon office of a trucking business.

The total number of people infected with the illness connected with Paul’s Hauling in Brandon is now eight, health officials announced Friday during their daily COVID-19 briefing.

Chief Provincial Public Health Officer Dr. Brent Roussin said six of those cases are employees at the business and two are close contacts of those employees.

The first case of COVID-19 at the trucking company was contracted through community spread, Roussin said.

The new case at the Brandon workplace was the only additional COVID-19 case announced in Manitoba on Friday.

The update brings the total number of cases identified in Manitoba to 284, 30 of which are considered active.

Five people with COVID-19 are in hospital in Manitoba; none are in intensive care.

Seven people with COVID-19 in the province have died, and 247 have recovered.

An outbreak of COVID-19 at Winnipeg Health Sciences Centre in March has been declared over by infection prevention and control officials, said Manitoba Shared Health Chief Nursing Officer Lanette Siragusa.

That outbreak was detected in a medicine unit on March 30 and forced at least 70 staff to self-isolate.

Since then, two rounds of incubation periods have passed and most staff are back at work, Siragusa said. There are still a few people recovering at home.

Strategies like restricting visitors in hospitals and restricting patient movement within that medicine unit helped contain the spread of the virus, said Siragusa.

On Thursday, 543 laboratory tests for the illness were done, bringing the total number of COVID-19 tests completed in Manitoba to 29,343.

Health officials also announced on Thursday that Manitoba will continue ramping up efforts to catch up on the backlog of non-urgent medical procedures that were put on hold in March to make sure the province was ready to handle a possible surge of COVID-19 cases.